The text that accompanies the following images is based upon Hazel Chisholm Mathews' own history of the Erchless Estate. 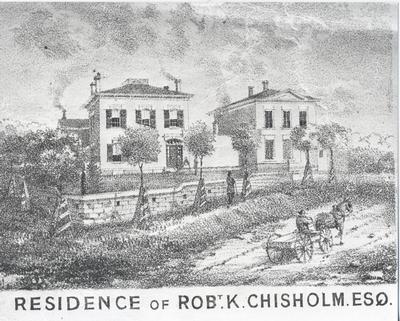 The Erchless Estate, residence of Rob. K. Chisholm ESQ. Image Details
The property at Oakville known as Erchless, with its two buildings of Georgian architecture, has experienced many changes since the beginning of the town in 1827. The plan of the survey made by H.J. Castle dated July 20th 1833 shows that Front Street ran down the hill to join Water Street, which paralleled the Sixteen Mile Creek, thus creating a triangular block numbered 83. It was here that William Chisholm, the town’s founder, built a brick building for a general store. 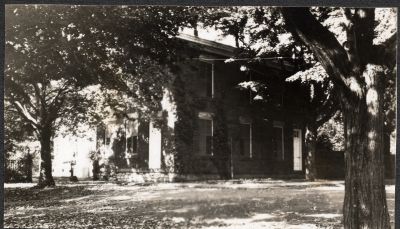 The store faced upon Front Street and beyond its entrance, towards the river, was an archway within which stood a platform that wagons backed up against for unloading casks and bales, etc. of merchandize. The interior of the store was almost at ground level. A stairway running up the north wall to the upper floor left marks which were visible more than a century later.

Nothing is known about the arrangement of the rooms in this building but close examination of the outside shows the cut line in the brick of the archway, which was filled in nearly a hundred years later. The entrance door in the corner towards Navy Street was made into a window and a window facing upon Navy Street is now the door. 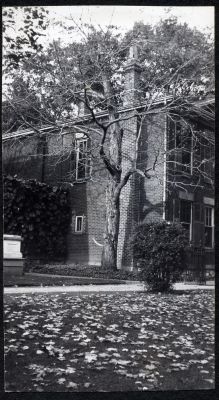 When his son, Robert K. Chisholm, became his deputy in the Post Office and Customs, William deeded his property to him in 1839. After William’s own house was destroyed by fire that same year, the family came to live with R.K., as he had always been called.

It was at this time that the building was enlarged by an addition to the south side where it now faced upon the lake. The new entrance, located behind a new stairway, led out to Navy Street and the high, moulded front door containing a pattern of frosted glass being still in the barn in the 1930s. According to tradition the upper floor was divided into a number of small bedrooms, which is reasonable considering the size of William and Rebecca Chisholm’s family. On the west end of the entrance hall, a door led out to a narrow porch running along the width of the new addition. The marks of the porch’s curved roof are still visible on the brick of the north wall.

R.K was but twenty-three years of age when his father’s death left the family in straitened circumstances, but having an astute business mind his enterprises prospered and he began construction of the building standing close by on the corner of Navy Street.

The new building contained two offices, the front one for the Customs House and the rear opening upon Navy Street, for a bank. This building of Georgian architecture is of brick brought from Oswego and limestone from Kingston as ballast in grain schooners. When opened in 1856 the first branch of the Bank of Toronto occupied the rear and the Customs Collector occupied the front office facing the lake. 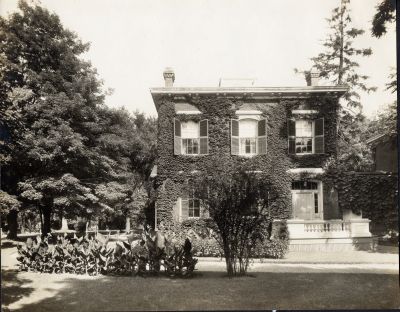 When entering the bank from Navy Street a visitor was faced by a long black walnut counter simple in design, in the back of which stood the iron door to a brick vault. The room was heated by a stove, the pipes of which ran up through the high ceiling to enter a chimney on the upper floor. The entrance to the long stairway leading to the apartment above, which was the quarters for the bank manager, was on the exterior and had no communication with either office.

The visitor entering the Customs House from the south side found a long counter stretching the full length of the room from east to west. It was made of heavy West India mahogany with massive S-shaped pedestals holding the counter top, which was well over an inch thick, with panels between the pedestals. At the west end in front of the iron door of the brick vault was a cashier’s cage fashioned of delicately turned spindles. Covering much of the back wall, and reaching almost to the ceiling, was a great mahogany dresser containing drawers and cupboards below and dozens of pigeon holes above. Here as well, stove pipes ran through the ceiling.

Upon climbing the long stairway one found three adequately sized and two smaller rooms, the ceilings of which were even higher than those below.

The walls of the Customs House are constructed of two layers of brick. The inner layer is strapped with wood to which the lath is nailed. Thus there is an air space between the plaster and the brick. 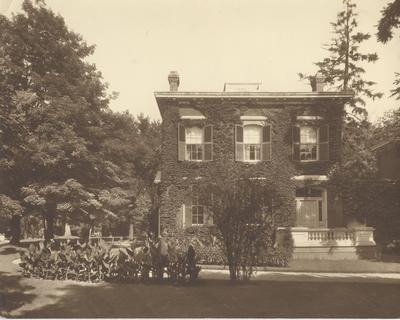 By the time the new building was in use, R.K. had become engaged to be married whereupon he began to enlarge the residence which was to take two years to complete. The higher ceilings in the addition made it necessary for there to be a few steps in the upstairs hallway from the old to the new part where R.K’s mother occupied the west bedroom. After she dropped dead at the front gate, this room, always known as “Rebecca’s room”, was believed to be haunted by the Negro servants. R.K. named his home “Erchless” from the 12th century castle, the seat of clan Chisholm in Inverness-Shire, Scotland. 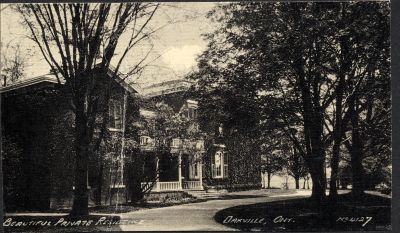 As time passed, R.K bought up the lots in the block north of Front Street, building a barn close to his back door in order to house the horses and carriages driven by a Negro coachman. Two houses are known to have stood in this block, one at the north end facing upon King Street and the other close by the large oak which the surveyors had used as a base when running their lines. After being moved across Navy Street it has since stood as the second house north of King Street.

In 1877 R.K. approached the Town Council with an offer to trade the lake bank for the closing of Front Street between Navy and Water Streets. Since coal had replaced wood as fuel for the steamers he had kept cord wood stacked and ready for their use. The trade was affected and R.K.’s property then covered more than three acres. 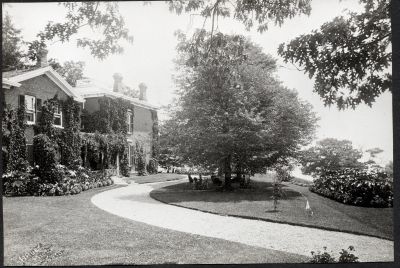 It was about 1920-22 that further alterations were effected in the residence and the grounds. The sliding doors were removed from between the two parlours, windows in the middle room were lengthened into doors, the bay window facing Navy Street was removed and the front door behind the stairway which had led out to Navy Street was closed. The front part was left untouched.

Upstairs the only known change was converting a front bedroom into a bathroom, that in the rear section having been done at an earlier time—probably when the windmill was erected.

Probably the greatest changes were made to the grounds where the terraces were replaced by sloping lawns and the rock garden was laid out—the first landscaping project of the newly formed Sheridan Nursery. However, Allan Chisholm’s type of flower beds bordering the driveway prevailed for many years. Grassing over the gravel drive was due to manpower during World War II to keep it weeded. 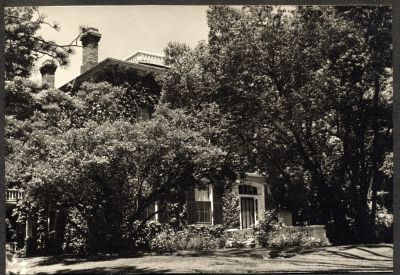 As to the Customs House, little was altered during the course of converting it into a dwelling house. A door was cut through the wall between the two offices and another to give access to the stairway; cutting out the vaults to eliminate dampness and permit the erection of a kitchen and the conversion of a bedroom into a bathroom, using the marble washstand from the residence which was found in the barn, were the sum total; otherwise all in this house was original.

What has been done during the decade since I left Oakville (in 1967) I have no way of knowing, but being the only person alive who knows something of the evolution of “Erchless” it seems important that this record be left. When the property was sold out of the possession of my family, which I was unsuccessful in circumventing, “Erchless” had been the home of six generations of Chisholm’s. 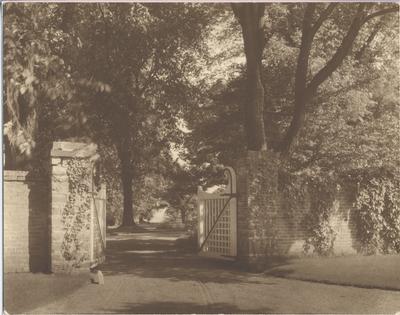