Media Type
Image
Text
Item Type
Photographs
Description
Merton school was first a log building. A brick one, S.S.#15, was built in 1857 that was later demolished to make way for the Queen Elizabeth Way, and a third school was built in 1923 that closed in 1958 when the new Palermo Public School on Old Bronte Road was opened.

The school was active in the life of the community with literary and drama clubs, and an active Home and School Association.

Sir Thomas White who was Canada's finance minister during World War I and was acting Prime Minister when Borden attended the 1919 Paris Peace Conference had been a student at S.S. #15.

A newspaper clipping of Merton news from 1889 in the Trafalgar Township Historical Society archives gives snippets of school related news: "Mr. McGillivray has been re-engaged as school teacher for 1890." Also, "Mr. John Luscombe has been called to take charge of a school in Ontario county." "Extensive preparations are being made to give a good entertainment and Christmas tree on Christmas eve. Come everybody and load the tree with presents for our friends."

Merton boundaries were present day Burloak Drive to 3rd Line, the railway tracks near Lake Ontario north to Upper Middle Road. The intersection of Bronte Road (originally called Station Road) and the Queen Elizabeth Way (formerly Lower Middle Road) was the centre of the Merton area.
Notes
Early area settlers were David Utter, Joseph Smith, William Bates, Cornelius Tipps and Henry Cale. The name "Merton" was likely chosen to commemorate Lord Nelson (his English home with Lady Hamilton was "Merton Place") as other local villages had chosen Bronte and Palermo. The post office remained open until 1917 when it was replaced by rural mail service from Bronte.

(The 1858 Tremaine map also shows a Merton at Appleby Line and Dundas in Nelson Township. Library and Archives Canada records show this post office opened in 1852, the post master resigned later in 1858, a new post master was appointed in early 1859 but again closed at the death of the post master later that year, then re-opened in April 1865 with the appointment of a new post-master. In September 1865, it was renamed to "Lothian".

The Library and Archives Canada records show Item 10870 that is the record of another "Merton" post office - this one in Trafalgar Township with John Sheridan being appointed post master in December 1883 and he resigned in August 1917. This record fits the description of the Trafalgar Township "Merton" around the present day QEW and Third Line.)
Subject(s)
school photos
Class Pictures
Merton (Ont.)
Trafalgar Township
Personal Name(s)
4 year-old (Sir) Thomas White is listed in the 1871 census with his mother Elizabeth, a widow, and his sister Mary who is 12 years old.
Local identifier
TTDH000400
Collection
Trafalgar Township Historical Society
Geographic Coverage
Copyright Statement
Copyright status unknown. Responsibility for determining the copyright status and any use rests exclusively with the user.
Recommended Citation
S.S. #15, Merton P.S., Undated
Contact
Trafalgar Township Historical Society
Email
WWW address
http://www.tths.ca 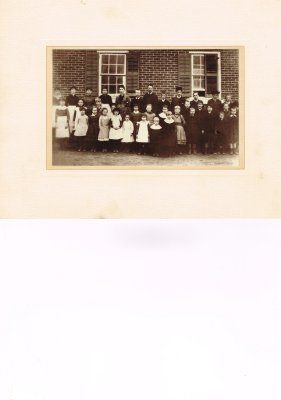