ON THE OCCASION OF THE OPENING OF THE OAKVILLE CENTENNIAL BUILDING AND THE CENTRAL LIBRARY - SATURDAY, DECEMBER 9, 1967

Special guests of the Corporation of the Town of Oakville are asked to assemble in the Trafalgar Room of the Holiday Inn at 12 noon sharp. In entertaining the Vice-Regal Party it is necessary that guests be at their places before the arrival of His Honour. The Lieutenant-Governor is addressed as "Your Honour", spoken of as "His Honour". Program outline for luncheon is as follows.

12 noon Vice-Regal Party arrives at main entrance of Holiday Inn. Party to be met by [crossed out: Reeve Merry] Mayor Anderson, Manager of the hotel. Will be introduced to Aide-de-Camp Commander Wilch by R. J. Cooksley.

- Party is led by Manager of the hotel to vice-regal suite reserved for His Honour.

12:10 His Honour and party leave vice-regal suite and are met in the lobby by [crossed out: Reeve] Mayor and Chairman of luncheon meeting - Mr. R. J. New - and is escorted to dining-room entrance. All guests are to be at their places and standing awaiting His Honour.

- His Honour, preceded by his Aide-de-Camp and followed by the [crossed out: Reeve] Mayor and Chairman, will proceed to the head table and take places.

- [crossed out: We are awaiting a decision from the A.D.C as to whether or not the royal salute will be played at this point.]

- His Honour will be seated and all guests may be seated.

- After Grace, dinner is served (His Honour is to be served first).

- (His Honour has agreed that this is to be an informal luncheon and that we should carry on with our regular program.)

- Chairman New of meeting may at a convenient interval during the main course desire to introduce to His Honour the guests and their function relating to today's ceremonies who are seated with him on this occasion.

- After the main course is completed, the Chairman will rise and announce a toast to Her Majesty in the form of - "Gentlemen - The Queen".

- Dessert and coffee are served during this part of the luncheon. R. J. Cooksley will be called upon to outline for all present the program to take place at the Project.

- Immediately following luncheon the A.D.C., His Honour, the Chairman and the Reeve (in that order) will leave the dining room.

- A.D.C. and His Honour will retire to vice-regal suite .

- After departure from dining-room of His Honour, guests may leave for the Project at their pleasure.

1:50 Vice-Regal Party departs main entrance of the Holiday Inn - Manager of hotel, Reeve, Chairman and R.J. Cooksley to escort His Honour to automobiles.

NOTE: Inspector Fullerton, O.P.P., will be in charge of arrival, departure, escort and security of Vice-Regal Party. He will liaison with Chief Oliver re details.

NOTE: Car to be available for Reeve, Chairman and R.J.C. in order that they may arrive at the Project before Vice-Regal Party.

- Parties depart for Project with escort. 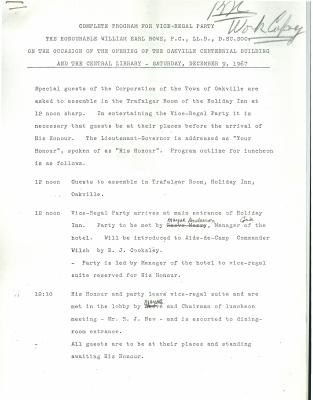