Creator
J.E. Commins Company Music Hall Oakville Ont., Photographer
Media Type
Image
Text
Item Type
Photographs
Description
Joseph Edward Cullingworth had taken over the running the farm of Miss Jemima Biggar from his father, Richard, and was still active in the 20th Halton Regiment when he married Mary Ann Joyce at the age of 48. Mary and Joe are buried at Knox Presbyterian Church on Dundas St., east side of the Sixteen Mile Creek, in the area where they had lived for so many years. George enlisted at Oakville with the 76th Battalion in World War I and went overseas in 1916. He suffered from shell shock but worked for Gooderham & Worts in Toronto for many years.
Notes
Ruth Mary Ann Joyce was the daughter of George and Esther (Brown) Joyce who emigrated from Ireland in 1856-7, settling on a farm south-east of Milton, near Omagh, Ontario. Mary's parents died when she was a young girl. She had 11 brothers and sisters in the Halton area. My mother, Ruth Mary (Powell) Choate remembers her Grandma Cullingworth as a quiet, kindly woman.

Mary Ann and Joseph had an exceptionally close friendship with their employer, Miss Jemima Biggar - whom their children and grandchildren called, "Aunt".

Ella M. and Samuel Joyce were witnesses at the wedding of Mary Ann and Joseph.

The above Rootsweb record has Mary's married surname incorrectly as "Callingsworth" and also has the surname wrong in her own marriage record to Joseph "Edwin" "Collingsworth". Mary was 29 years old when she married Joe.

Gladys Pridmore, neice of Joseph Cullingworth, wrote to his granddaughter Mary (Powell) Choate, of Joe, that "he was a kind man, a great church worker. They always had family prayer in the evening and grace at the table. I remember him taking my hand as we walked home from church when someone's dog came out to bark at us. I felt very safe indeed."
Inscriptions
Handwritten in ink below the picture, "Aunt Mary & Uncle Joe Cullingworth".
Date of Publication
1894
Dimensions
Width: 1200 px
Height: 1894 px 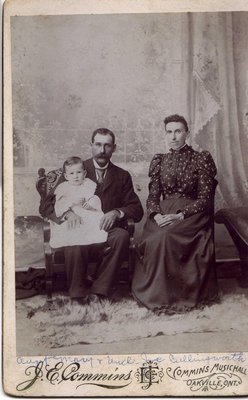