Media Type
Image
Item Type
Photographs
Description
This was a Designated Town of Oakville Heritage Building. The house was built in 1850 by James Appelbe who emigrated from Ireland in 1815 with his widowed mother and older brother, William.

James was apprenticed to a merchant in Hamilton and later taught school. In 1831 he married Jemima (Kaitting) McDuffy, whose grandparents were early settlers in Trafalgar Township, arriving in 1808.

During his life in Trafalgar Township, James became a storeowner and served as postmaster, a Justice of the Peace, Treasurer of Trafalgar Township and was one of the first directors of the Bank of Toronto. He was Recording Steward of the Nelson Circuit for many years.

In time, he was known by all as "Squire" Appelbe. The family farm and house were on the north side of Dundas Street, just west of Trafalgar Road. Jemima and James built this brick house in 1866 when they accquired the property.

Today the street address of the property is officially designated as 257 Dundas Street East. However, in 2017 the house has been moved to 3041 Postville Street, Oakville.

"The house is an example of rural Oakville Vernacular style. It is a 1 1/2 storey farm residence, with a side gable roof, a central gable dormer, and a five bay facade. Four unique full-length windows with transoms distinguish the front elevation", Trafalgar Township Historical Society, Ward Five History.
Notes
In the spring of 2007, the house and property was severely damaged by vandals. In June 2009, fire further damaged the house.

The second photograph in this record shows the back entrance, a red brick structure behind the more formal front of the house. This photograph was taken just before the vandalism and fire.

The internet link included here, to the Oakville Beaver's Inside Halton.com 2007 article on the damage, shows the front of the undamaged house from a different angle as well as the boarded, damaged summer kitchen of the house. 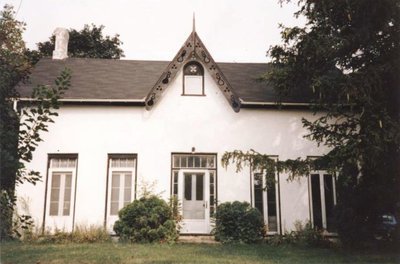