Creator
Linda Reed, Author
Media Type
Text
Item Type
Prints
Description
A newspaper article about the 100th anniversary of Sheridan United Church. This red brick church was dedicated on November 7th, 1869 and used continuously for the next 107 years. When dedicated, it was the Sheridan Wesleyan Methodist Church and the pastor was Reverend Sam Philip. It had cost about $2,500 to build. It was built again on land donated by the Lawrence family, just north of the old building on the west side of the Town Line - which puts it on the west side of present-day Winston Churchill Blvd., just south of the QEW.

Prior to this red brick church, the congregation had used an old 1820 frame building which stood on the south-west side of the Hammondville intersection, now Winston Churchill Blvd. and the South-Service Road, on the Lawrence family farm. This old wooden building is now restored and part of the Kelso Museum, Milton.
Notes
No source citation is given but a note indicates it was an article in the Mississauga News, October 29, 1969.

The red brick church at the intersection of South Sheridan Way and Sir Winston Churchill Blvd. has survived despite rapid industrialization in South Peel.

The church formerly servived the community of Sheridan which was bisected by the Queen Elizabeth Way and north and south service roads. All that remains of the community is the solid brick church which was built in 1869 for approximately $1,400 on land donated by Ferris Lawrence.

The history of the church began in 1867 when Rev. Thomas Howard was stationed in the community. Services were held in an old frame school house before the church was built.

The first service under the oil lamps in 1869 was memorable. The building was dedicated by Rev. Samuel Philip, pastor of the church.

Amelia Falconer played hymns on an organ loaned by Ryerson Kelly for the event. She was the grandmother of Edna Lawrence of South Sheridan Way, who also played the church organ.

Miss Lawrence has watched the church go through most of the 20th century and has fond memories. She says many fine ministers preached at Sheridan including Rev. H. S. Lovering who stayed 13 years.

The anniversary will be commemorated by a stone cairn which will be erected in front of the church. The interior of the building is being decorated for the event.

Anniversary services at 10:15 and 11 a.m. will be conducted by Rev. Donald Gillies, a former minister.

The minister of Sheridan Park Royal is Rev. Arnold Foster.

Over 159 invitations have been extended to former members.

Ellena Savage, a 95-year-old woman who has attended Sheridan United all her life, will attend the service in a wheelchair. Hymns from the first service will be sung at the anniversary. 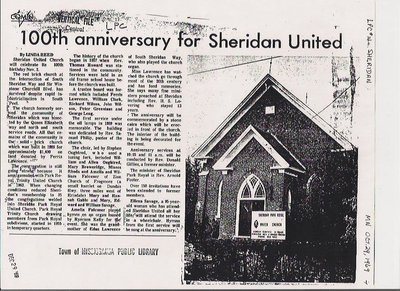