Sheridan United church of the Trafalgar circuit celebrated its sixtieth anniversary on Sunday with special services. The pictures show: (1) Rev. F. L. Carpenter, Postville, the pastor. (2) The present brick church built in 1869. (3) W. S. Savage, 83, Oakville, who sang in the choir at the opening of the church and who was again in the choir on Sunday. (4) Miss Edna Lawrence, Sheridan, organist at the church, whose grandmother, Amelia Falconer, played the organ at the opening. (5) and (6) Mr. and Mrs. George H. Hardy, Sheridan, the oldest members. Mr. Hardy helped to build the brick church. (7) Mrs. William Oughtred, Clarkson, who sang in the choir sixty years ago with Mr. Savage, and was in the choir again on Sunday. (8) Old frame shool house in which the congregation worshipped for many years before the building of the brick church. 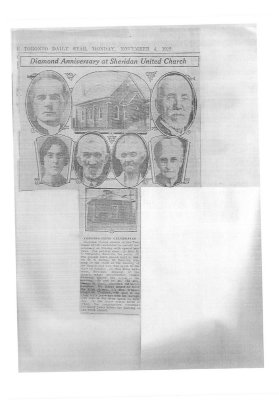