Have All Sheridan Property Needed for Roads Says Elson

Oldtimers in the little village on top of the hill overlooking the ford plant, Clarkson refinery and other manifestations of so-called progress nowadays smile seldom.

Doom, the think, is their too constant companion. Not they, but their beloved village is to be torn asunder to make way for the ever-increasing demand for more space for more speeding cars. When they read further, they will realize their fears are, to say the least, exaggerated.

Sheridan, says Mrs. Esther Murphy, is doomed. Many of the homes there, including her own, are marked for demolition. She thumbs through her well-worn history of the village atop the hill (centre picture above) as she tries to ignore the raucous sound of machinery ripping up the good earth to create a service road parallel to the busy Queen Elizabeth Way.

Her neighbour, Mrs. Delia Devlin, leans on her front gate (top picture [not included here]) and stares through, rather than at, the highways workmen. She too must face the inevitable destruction which will precede construction of a new way of life which to now has moved past but not deeply affected the oldtimers and their leisurely way of life. Her own home, she expects, will fall victim to changing times.

"It was built by ancestors of Mrs. Murphy,", she explained, "over 100 years ago." She said she has been living ther for 55 years herself.

"I have loved living at Sheridan," she said quietly. Mrs. Devlin said she has always been fond of taking nature walks through the countryside surrounding the community. "It is all beginning to change now," she declared. "It is so built up now that it is not so nice."

"When the delegation went from the church to the Highway Department, they were told there was nothing that could be done to save it," she said. "This will be the end of Sheridan, and probably the end of the post office at the store."

Sheridan's historian, Mrs. Murphy, who has lived in the area since she was a child, said she believed the highway development meant the doom of Sheridan. "Many of the old homes will be demolished," she said, including her own.

"My parents were married at the Sheridan church," she declared, "And we hate to think of the church going." She said a deputation from the church had met with the Department of Highways to see if anything could be done to save it.

"The Sheridan store was opened in 1857," she said. "Before that time the community was known as Hammondville." She said the store was built by Erastus Hill. "It is and old and familiar landmark and people will miss it around here."

The church was first opened in 1869 by Dr. C. Taylor. "It has been a focal point for Sheridan activities since that time," she pointed out.

But the two elderly women agree with Mrs. Lawrence Paul, the storekeeper's wife, that "no one knows what's going to happen for sure. The government won't tell us."

What's slated is a reprieve, even if only temporary, for the doomed community, in light of an announcement by Deputy (See SHERIDAN, Page 2) SHERIDAN (Continued from Page 1) Minister of Highways M. A. Elson Monday that no overpass would be constructed there for the present time at least.

Fears expressed by residents that the little community would fade into obscurity with the construction of an overpass and the closing of the Town Line, seem groundless, with Mr. Elson's statement that the only construction work planned by the department called for service roads north and south of the Queen Elizabeth Highway, running west only from the Town Line.

"The Town Line will not be closed until such time as service roads are constructed east of Sheridan," he explained. "Traffic at the town Line does not warrant the construction of an overpass at the present time," he added.

First sign of the possible change to come at Sheridan is noticeable with the re-location of Laawrence Paul's store. Presently located at the southwest corner of the intersection, the establishment is among the first old landmarks doomed to destruction, to make way for the service road.

Entrance to the southwest service road will be located at its present site. Owner Lawrence Paul is presently engaged in constructing a new building north of the Queen Elizabeth Highway on the north side of the service road, west of the Town Line. He's even optimistic about the new store in a new location.

Mr. Paul purchased the old store from J. E. Sinclair about ten years ago. "We don't like to see these changes," he decalred. "But it will certainly make the corner a lot safer." He said the way it was now, it was impossible for cars approaching the Q.E. to see oncoming traffic. "There have been lots of accidents here at the corner," he asserted. 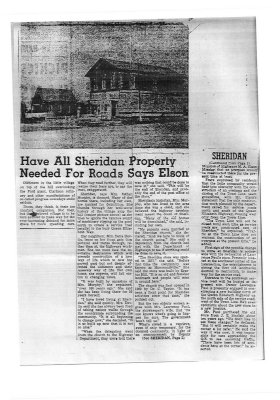