Media Type
Image
Text
Item Type
Medals
Description
Ron enlisted as a private in Toronto on October 16, 1917 in the York & Simcoe Foresters Const. according to the memorial at Knox Sixteen Presbyterian Church. But in his verbal memoir, he said he "went in the army in 1916".

As a soldier of the Canadian Forestry Corps., in his own words, he was in England for a while, then France, then back to England for about 6 weeks before coming back to Canada in April 1919. He then "worked on the farm around Oakville that summer" and married Ruth Cullingworth on October 9th. The families worried about Perce King who was a prisoner of the Germans working in a salt mine and George Cullingworth, Ruth's brother who was wounded.

This Powell family has a history of soldering with the British army, Ron's grandfather and great-grandparents having served in India and the Crimea. Harry Powell wrote a booklet about his experiences as a 13th Light Dragoons trumpeter in the Charge of the Light Brigade which is available for reading on the internet, and there is a replica figurine of him.
Notes
Veteran Affairs Canada doesn't have information about the Canada Forestry Corps so a link to Wikepedia information is here for further information. The Canadian Forestry Corps was created 14 Nov 1916. The crest of the Canadian Forestry Corps consists of a circle, with a beaver on top, superimposed on a pair of crossed axes, with the text "Canadian Forestry Corps" around the edge. At the center of the circle is a maple leaf with a King's Crown. A photograph of this badge is shown here on the main page of this record.

The British War Medal was awarded to all ranks of Canadian overseas military forces who came from Canada between 05 August 1914 and 11 November 1918, or who had served in a theatre of war. Please see the link to Veteran Affairs Canada physical description of the medal and information about the medal.

The Victory Medal was awarded to all ranks as well. Please see the link to Veteran Affairs Canada Victory Medal for a description of the medal and further information. 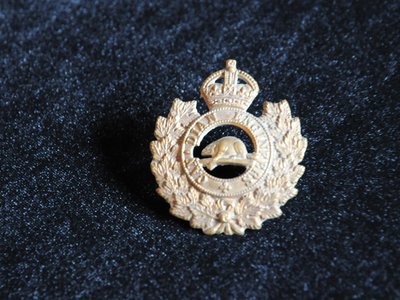