Media Type
Image
Item Type
Photographs
Description
We know the Trafalgar Township Police Boy's Band was active in the 1950's but we don't know the year it started or who got it started. This photo was taken in the early 1960's because we know that is when Walt Wilson was in the band.

Burt Speck remembers playing bugle in this Band. He believes they wore a yellow belt about 4 or 5 inches wide, with dark blue or navy shirts and pants. They may also have worn police type caps as well as the helmets shown in this photograph.

They practised at Munn's School.

Burt remembers that, "the first parade (he) did was the Orange parade in Arthur." Although he doesn't remember the exact year it was likely in the 1950s.

He remembers later playing in Niagara Falls, NY where someone threw a hydro insulator and hit drummer Ted Waller on the forehead. Ted went down but the rest of the band had to keep marching and playing, a terrifying experience at a young age. Ted Waller later became a Trafalgar policeman.

In this photograph, we see the colour guard with the band flags and the drummers waiting for the call to attention. Behind, the buglers can be glimpsed. The drummers are playing tenor drums which are large snare drums, and the bass drum, always a feature in a parade band, can also be seen.
Notes
The Town of Oakville celebrated the centennial of its incorporation in 1957 with parades, the crowning of Miss Centennial, tree planting, the Lion's Club raffled off a car, and more, between June 29 and July 6, 1957. In this photograph, the Trafalgar Township Police Boy's Band waits to participate.
Inscriptions
Handwritten on the back of the photo: "Trafalgar boy's band Centenial June 30, 1957".
Date of Publication
30 Jun 1957
Subject(s)
Centennial celebrations
Marching bands
Oakville (Ont.)
Trafalgar Township
Personal Name(s)
Burt Speck
Local identifier
TTRMW000187
Collection
Trafalgar Township Historical Society
Language of Item
English
Geographic Coverage
Copyright Statement
Copyright status unknown. Responsibility for determining the copyright status and any use rests exclusively with the user.
Recommended Citation
Trafalgar Boys Band, Oakville Centennial Celebrations, 1957
Contact
Trafalgar Township Historical Society
Email:michelle@tths.ca
Website:
http://www.tths.ca 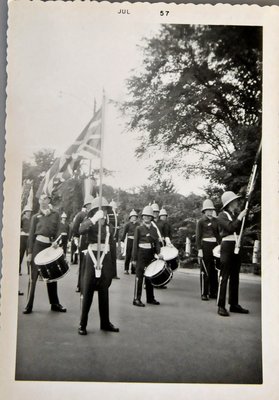