Media Type
Image
Text
Item Type
Photographs
Description
Photograph taken by Roy Lessels to mark the latest location of the two remaining gate pillars to Holyrood Estate, Oakville. The estate lay at the south (Lake Ontario) end of Dorval Drive. Roy's father, Jack, was head groundskeeper during the estate ownership of Gordon and Kathleen Lefebvre, 1929 to 1948, and again to David Knapp, owner from 1955 to 1969.

As Roy says in his Notes on the photograph album page, these gate posts have been moved more than once. They had brass letters saying, "Holyrood" and occasionally, Roy's Dad would ask him to get some Brasso and polish these letters.

The gate pillars had originally had 5 cannonballs on the tops, and there had been originally 4 of them.
Notes
Information and photographs of Holyrood house, the Lefebvre family and the history of the property in the Trafalgar Township Historical Society digital collection were shared by Mr. Roy Lessels in May 2016. Roy's father was the head grounds keeper for the estate from 1929 to 1945, in the employ of Gordon Lefebvre who was head of the Pontiac Division, General Motors Company, and again from 1955-1969 for David Knapp. The images with notes remain the property of Mr. Lessels.

The "Groups of Related Records" link will take you to the other records, maps of the property and photographs of the estate people in Mr. Lessels photo album.
Inscriptions
Note by Roy Lessels: These entrance pillars are now in their third location on Holyrood property. Original location was on Highway #2 which is now Lakeshore Road. Second placement was two thirds down Holyrood Drive on the east side. David Knapp's entrance. Present location is at the entrance to the water front walkway. Going back to the 1930's, I have stood beside these pillars at all three locations. Now it is Michael's (Roy's son) turn to stand beside them.
Subject(s)
Estates
Oakville (Ont.)
Personal Name(s)
Alice Lessels, d.age 99, 11 months, 14 days, married John (called Jack) Lessels, b.1902, d.March 5, 1986, age 84. Son John Roy (called Roy), b. February 13, 1930, married Joyce. (He worked for Rubbermaid for many years, Joyce worked for Oakville dentist, John McLennan.) Son Alistair Anderson, b.January 27, 1932 (in Edinburgh, Scotland), married Diane Hammer in March 1964, d.July 29, 2014. (He had a real estate brokerage in Collingwood.) Harry, brother of Jack Lessels, d.August 19, 1990.
Local identifier
TTJRL000513
Collection
Trafalgar Township Historical Society
Language of Item
English
Geographic Coverage
Copyright Statement
Copyright status unknown. Responsibility for determining the copyright status and any use rests exclusively with the user.
Recommended Citation
Gates, Holyrood House, Oakville
Contact
Trafalgar Township Historical Society
Email:michelle@tths.ca
Website:
http://www.tths.ca 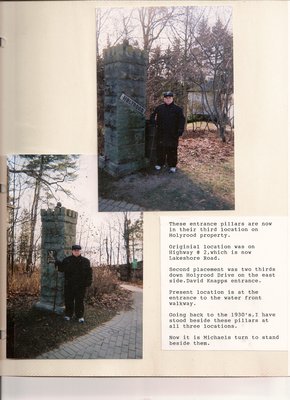