Media Type
Image
Item Type
Photographs
Description
Barb Priestly is wearing the majorette hat on our left, Jean Crutcher is on our right.

An August 1959 Toronto Star photo showing the band marching in a parade during a week-long convention of the Fraternal Order of Eagles, shows the Trafalgar Police Boys Band lead by Barbara Morgan with at least 3 female flag bearers leading the band.

The band was lead by Trafalgar policemen John Robson and Harry Wilson. Another Trafalgar policeman, George Stalkfish, also helped to teach how to play the bugles and percussion instruments. The man in the centre back row could be John Robson. (It is known to not be Harry Wilson, father of Elizabeth, Walt and younger brother, Harry.)

Briefly: in 1948 Fred Oliver was selected from 110 applicants and appointed the Police Chief of Trafalgar Township. Along with his police duties, he was also the truant officer, dog catcher and building inspector for the Township of Trafalgar.

Fred policed from Lake Ontario on the south to Hornby, Ontario on the north and to Burloak Drive, as we know it now, on the west. His area included the Village of Bronte and excluded the Town of Oakville. Oakville was south of the Queen Elizabeth Way at that time and did not include the Ford plant lands. The population of this area was approximately 5,500. Fred worked alone out of his residence until 1952 when he hired a second officer, Harry Wilson.
Subject(s)
Marching bands
Youth bands
Boys - Societies & clubs
Trafalgar Township Halton County Ontario
Local identifier
TTWGW000679
Collection
Trafalgar Township Historical society
Geographic Coverage
Copyright Statement
Copyright status unknown. Responsibility for determining the copyright status and any use rests exclusively with the user.
Recommended Citation
Barb Priestly and Jean Crutcher, Majorettes, Township of Trafalgar Police Boys Band, late 1950's
Contact
Trafalgar Township Historical Society
Email:michelle@tths.ca
Website:
http://www.tths.ca 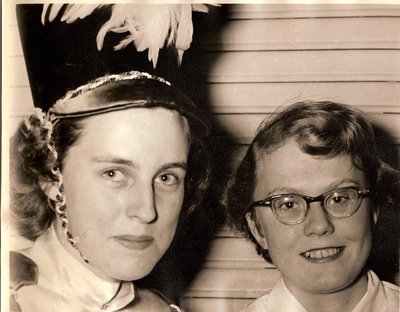