Media Type
Image
Text
Item Type
Photographs
Description
The Girl Guides of Canada website and the Wikipedia page for the organization are linked to this record for your further information both explain that the first unit to be registered was in St. Catherines, Ontario in 1910.

The property was bought in 1941 by Nelson Daniel Lawrence and Mary Margaret Maude Lawrence from Barbara Jane Stuart. In 1944, the property "Lawrendale" was given to their son, Denzil Featherstone Lawrence at his marriage to Marion Miller. So many of the family farmed along Bronte Road the area was informally known as "The Lawrence Road".

Denzil ran the farm as a dairy farm to 1967, the Lawrences owned the house and about 7 acres after that until about 1996.
Inscriptions
Maud Elizabeth Miller (Pickard) wearing her Girl Guide uniform in the first troop in Canada in St. Catherines 1910. 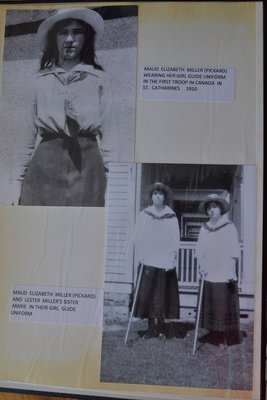