Media Type
Image
Item Type
Photographs
Description
The Post Inn was opened by the Post family on the south-west corner of Dundas Street and 7th Line (which is now called Trafalgar Road), or on Lot 13 Concession 1 SDS, before 1827. The Inn was first run by the father of the Ephraim Post in the photograph here, and his mother, Elizabeth (Lyon). It was enlarged by a two-story addition across the front when son Hiram took it over in 1841. The old two-storey Inn eventually had a gas bar, a general store, and the addition of an ice cream booth made it a destination for area resident drivers until the complex was torn down in the 1960's.

Early names for the busy intersection village were Post's Corners and Postville.

The Trafalgar Township Historical Society has several photographs of the buildings in the complex in this internet collection, as it was in the 1940's-1960's with the two storey building, the gas bar and ice cream booth. Some are linked here under the photograph for your further information.


Notes
The 1881 Census spelling of Post is "Poast". Thompson Egbert, son of Ephraim and Jane, is listed as "Thomas" and in the 1871 Census, Ephraim is spelled "Ephrom".

A relay of horses was kept at the Inn for the mail coach. On the same property, behind the Inn, there was a drill shed for the storing of items for the local militia. Much local business was done at the Inn and there are records of ward elections taking place there until at least 1852.

The 1857 Tremaine's map shows the property was owned by Benjamin Thompson. James Young was running the Inn in 1876 when George Baker took it over. Mr. Baker remained until his death. This complex was owned by Bob Fairman in the 1950s. The Inn was torn down in the late 1960's. 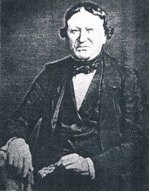