The paper includes photographs of both stores. Today's 215 Lakeshore Road East was the Beatty store, the Creighton store is now 184-186 Lakeshore Road. Both are Designated Heritage properties.

Re the "mystery question" request for information, and to give you a glimpse of the author's excellent research and writing:

"Hence, in 1835, when James felt he was in a position to open another outlet, he bought the store in Oakville that I call the Beatty store. The purchase is interesting and sheds some light on the construction of the store. The first purchase was two back-to-back lots bought from William Butts for 400 pounds. This price was a very high markup from the price of 60 pounds Butts paid the original developer William Chisholm in 1833. This clearly indicates the purchase included some substantial building or buildings added by Butts even though none are mentioned. The second purchase was bought directly from Chisholm. The price of 77 pounds was similarly marked up considering the tiny size of the land included. The designated heritage store actually spans the land of both purchases. Both purchase documents were signed at the same time with Chisholm even witnessing Butts purchase. Considered together, it seems most likely that Butts and Chisholm contracted with James Beatty to build a store to his specification. Butts probably committed to the erection, while Chisholm (who owned a sawmill) provided the lumber. This explains why James Beatty was able to buy an existing store spanning land owned by two different people.

I know that James bought the store in 1835, but I am pretty sure he himself stayed in Toronto and continued to run his store there. He would have appointed someone to manage the store for him but I have no clear proof who that person was."

1836 saw the start of financial trouble for James. In 1837 the outbreak of war, plus the financial situation of American banks and then Canadian banks stopping hard cash payments, resulting in a loss of British investment money a scarcity of hard cash in Upper 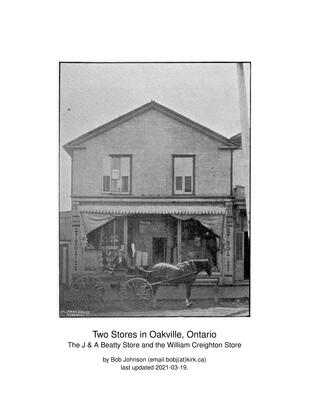