Note the "detail" image showing the atachment of the front door and the date above door which reads, "A.S. 1849".

Land records indicate Arthur G. Heaven sold the farm to his son Herbert Heaven in 1895. He and wife, Jane, moved to “Glenside”, just west of 4th Line, south of the Lakeshore Road, in the area of McCraney`s Corners.

On 29 Oct 1896, at St. Judes Church, Oakville, Herbert George Heaven, a 31-year-old farmer of Trafalgar Township who married Charlotte A. McCraney of Trafalgar, daughter of James W. and Augusta McCraney. The farm stayed in the Heaven family until April 1925.

The property was bought in 1941 by Nelson Daniel Lawrence and Mary Margaret Maude Lawrence from Barbara Jane Stuart. In 1944, the property "Lawrendale" was given to their son, Denzil Featherstone Lawrence at his marriage to Marion Miller. So many of the family farmed along Bronte Road the area was informally known as "The Lawrence Road".

Denzil and Marion ran the farm as a dairy operation to 1967, then Denzil became the first A.E. LePage real estate agent in Milton. After 1967, the Lawrences owned the house and about 7 acres after that until about 1996. Look for other photographs in the internet collection of "Lawrendale" and the family of Denzil and Mary Lawrence.
Notes
This photograph was taken in 1984.
Date of Publication
1984
Date Of Event
1984
Subject(s)
Buildings
Farmhouses
Milton (Ont.)
Trafalgar Township
Boyne, Trafalgar Township, Halton County
Local identifier
TTOICLM0012
Collection
Trafalgar Township Historical Society
Language of Item
English
Geographic Coverage
Copyright Statement
Copyright status unknown. Responsibility for determining the copyright status and any use rests exclusively with the user.
Recommended Citation
Heaven Farm
Contact
Trafalgar Township Historical Society
Email:michelle@tths.ca
Website:
http://www.tths.ca 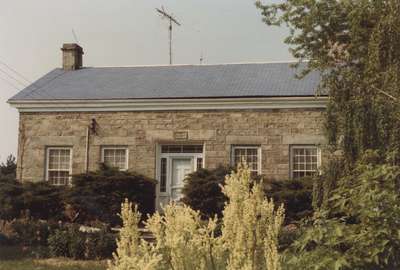