This was the scene outside Oakville Motors which was operated by the late A.J. Gurry.

The train pictured, in this 1930 photograph, was on its way to the Canadian National Exhibition and then to the Chicago World’s Fair.

Although the train made the trek through Canada in 1930, the Fair wasn’t held until 1933.

The train was sponsored by Roger’s Majestic Radios and made many stops in Ontario before traveling to Chicago.

No one knows the identity of the first two men in the picture but the rest are no strangers to the area.

Starting from the third man on the left they are: the late Frank McCraney, Ken Chambers of New Liskeard, George Harding, Clift Barclay, Len Cherrington of Oakville, the late Bob Billings, Jimmy Steed of Oakville, Harry Card, who is the owner of the picture, Pete Halliday, the late Jim Kew, the late A.J. Gurry, the late Harold Stirling, the late Vernon Bynes, Ab Hughes and the late Art Heaven.

All the men pictured were employees of Gurry and the picture was given to Harry Chard by Vernon Bynes’ son.

The building on the left is now Chreston’s Restaurant and the one on the right is the Royal Bank.

Gurry was the Oakville dealer for Majestic radios in the 1930s and because of that, the train stopped in front of his store for a promotional photo.

Harry Card has always worked in the garage business and is now employed by the Fina Oakville Service Centre of the corner of Kerr and Rebecca Sts. 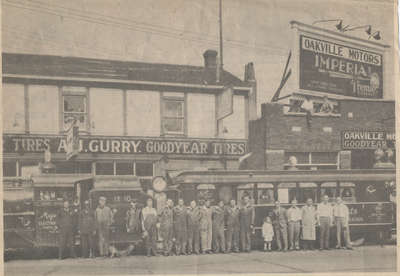