Creator
Herb Schafer, Photographer
Media Type
Image
Item Type
Photographs
Description
This farmhouse was purchased in 1910 by George H. King from Mr. Kaitting. The walls were reportedly 5 bricks thick. The pictures show part of the side sunken garden. In 2009 the home was gutted by fire. This home was just west of Sixth Line, just east the Sixteen Mile Creek on the north side of Dundas. 237 Dundas Street West, Concession 1 NDS, Lot 18, Trafalgar Township.

Matthew Cleghorn has recently provided more personal recollections of the King family at Kingsholm. Please click on "View Comments and Add Your Own" under the photograph to read all.

In August 2018, Mr. Cleghorn wrote:
I have been in receipt of my aunt Jean (King) Price's personal recollections of her childhood years at Kingsholm Farm (the Kaitting house).

George King, Jean's father, bought the property from Mr. Kaitting, who had received the property from the Indians. The bricks of Kaitting house were all made at the spring in the back woods. The house was five bricks thick to keep in the heat in the winter and keep the heat out in the summer.

George King was 21 when he married Jessie Caverhill but he lived in the house at least two years before that in order to have it ready for his bride.

Jean said that when they were kids they were told there were lots of graves in the woods and that they were Indian graves.

Mr. Kaitting stayed in the house after George bought it and he remained until Grandma Caverhill died and Grandpa Caverhill came to live with the Kings.

George King was a councilman for many years.

Knox Sixteen Presbyterian Church played an important role in the lives of the Kings and they had electricity installed in the church in memory of Grandma and Grandpa Caverhill.

The front lawn of the home was the site of many concerts and the front field played host to bonfires and fireworks on May 24th. 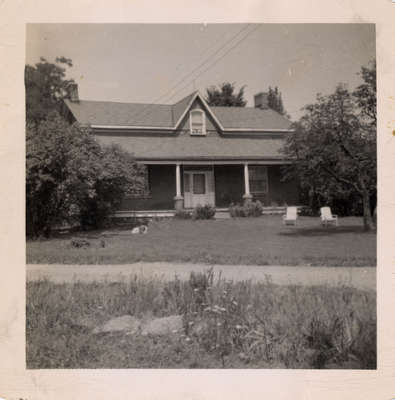